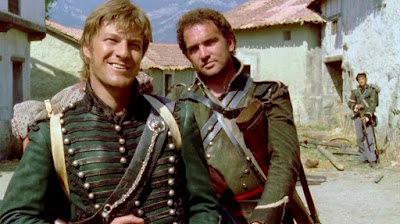 The Sharpe novels and TV series started me off in wargaming about 15 years ago, and it is a hobby that I have enjoyed immensely. It is never complete; there is always something to add, adjust or sometimes completely change. I am very thankful to Bernard Cornwell for that, he has kept me busy well beyond reading his books and watching two great TV series.

It must have been 7-8 years ago when I bought a copy of Sharpe Practice and with it came two 28mm figures from Alban Miniatures. I did not like the ruleset but I did like the figures. They were so different from the chunkers from all the other 28mm Napoleonic manufactures. But because of this they were useless to me so I put them away. A lot of things have happened since then, I got rid of the 3000 twenty-eight mm Napoleonic figures that I had painted and paid someone else to paint an equivalent 18 mm Napoleonic army for me. This was without doubt a correct decision, they take much less room and are so much easier with which to game.

I did keep around a hundred 28mm figures so I  could play Sharpe Practice 2 (which unlike Sharp Practice is a great ruleset). These were both French and British and are Perry, Front Rank, Calpe and even some Foundry miniatures. All very nice figures.

In the last few years, I have gone beyond Napoleonics to other wargaming eras and have painted figures from several different manufacturers. Every now and than I ended up painting figures which were much more anatomic without the exaggerated heads and hands that characterize most 28mm miniatures. I particularly like the FIW figures from Conquest Miniatures as well as the fantasy figures  from Westwind. Both these sculptors' figures are finer in proportion than most 28mm miniatures although Alban are still the best proportioned I have seen.

I recently was going over my now small 28mm Napoleonic skirmish collection to see what I needed to add. I have to admit missing painting the occasional 28mm Napoleonic, but I just was not that keen to paint any chunkers, I get enough of that from adding to my Dark Ages collection. I then remembered those 2 figures from Alban Miniatures, dug them out of the box and said why not!

They are a little more challenging to paint as they are much less exaggerated in proportion but at the same time they are excellent sculpts as one can see. I am not a great painter but I believe they came out pretty good.

That was the easy bit but I would like to build up enough figures to field a French and English skirmish force. And here comes the rub, Alban Miniatures are of course now defunct. So where was I to get the figures? As you can see from their website, they had a good range of French, a fairly good range of British and had added some Austrian and Saxon figures. They are very nice figures and I wanted some. I advertised on TMP, Lead Adventure, TFL forum and Yahoo group and fortunately struck pay dirt in the Netherlands. Dick B., a Dutch wargamer, just happened to have almost 60 rifles and voltiguers that he was never going to paint. He very kindly agreed to sell them to me and they are on their way now.

The search continues, of course, as there are French line voltiguers and fusiliers as well as some British light infantry out there. If any knows a source or has some to sell please contact me. Maybe one could say that I am on quite a quixotic adventure but it does excite me! 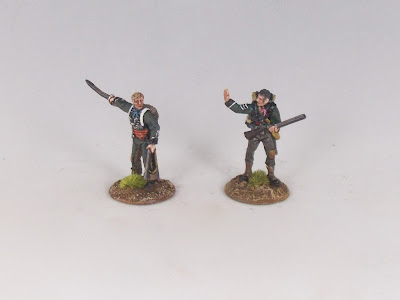 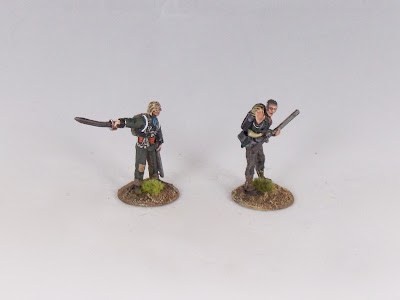 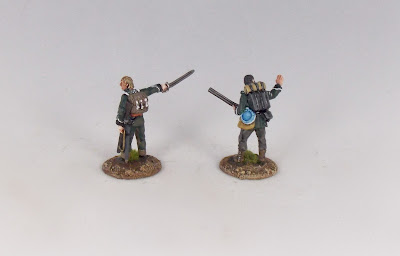 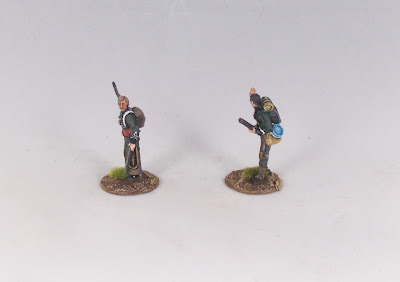 Now if I could only figure out how to improve the white balance in my photos, I will be all set.
Posted by john de terre neuve at 08:00