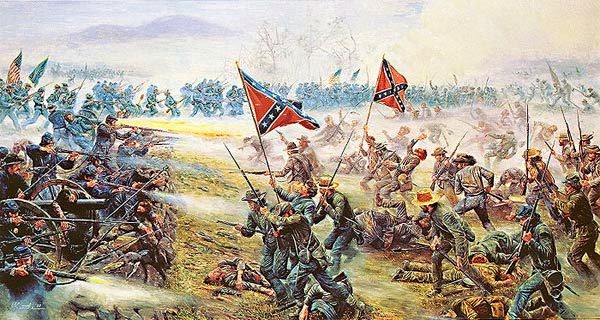 We had game 5 in our Longstreet campaign last Thursday and I have to say that the Union forces (me) got completely crushed, it is the most lop-sided game we have played. I am not sure what really happened but a series of snake-eyes on the German dice and the fact that I did not get any red-bannered interrupt cards in my hand until the end of my first deck (and then had 5 at one time) did not help. I suspect that maybe my tactics were not the best either!

We played scenario 8, The Cornfields.

I again lost the toss (it was a tie) and ended up being the defender. I set up a token force to my right flank and my cavalry to my left, with the bulk of the forces being in the centre. I got off to a good start as I had a quickstep card in my first 6 cards, but it went down hill quickly after that. I quickly took some hits and my dice absolutely failed when I tried to fight back. Before I new it the confederates were all over me and that was sort of it. You can find the AR on Adam's blog, the Fencing Frog.

Notwithstanding the horrible loss of stands during the game, my post battle process went rather well and I did earn some Epic Points, and our campaign is now tied. I am going in our next battle with finally a numerical superiority (as should be the case in late 1863) of stands, but very weak in artillery. 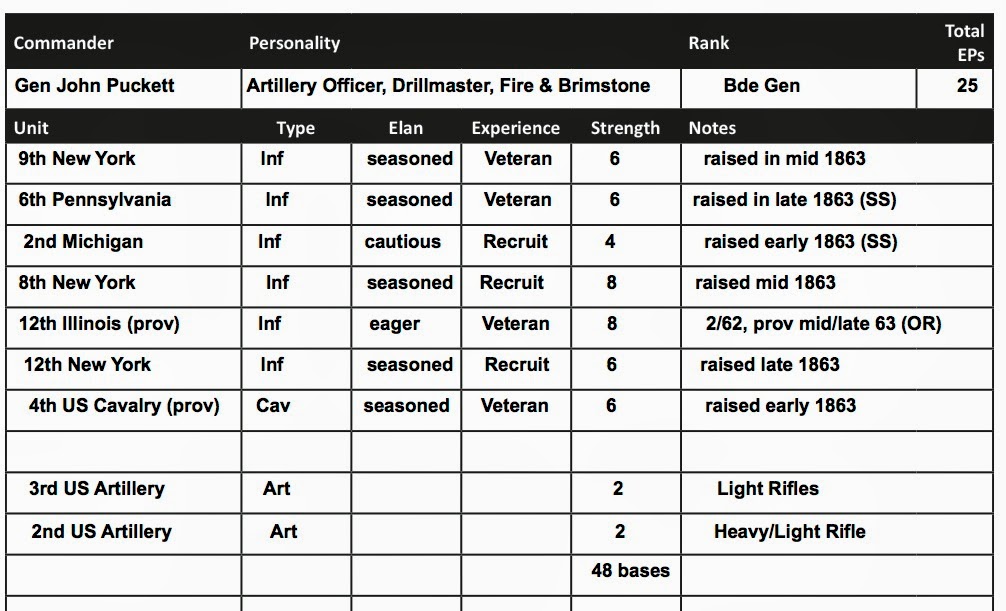 As you can see above, most of my units are not small, and I was able to get rid of some cautious units (weak in combat offense) by forming a new provisional cavalry unit and adding to the provisional infantry unit. Still when you compare my forces to Adam's as you see below, he still has a significant number of infantry units with eager élan (strong in combat offense), a challenge to be sure. You can also see that his units are almost all veterans (strong in shooting and combat defense)

Anyway the last battle of 1863 is scheduled for next Thursday, I will really have to start cutting down his forces and do something with all those guns.

A bit of good news though, Fernando has completed the painting of my Union army and they should be leaving Sri Lanka shortly. The photos look good, I plan to apply some washes when they arrive and they have to be based. I am still unsure about their OB, but still 1-2 weeks to think about it I suppose.
Posted by john de terre neuve at 11:44