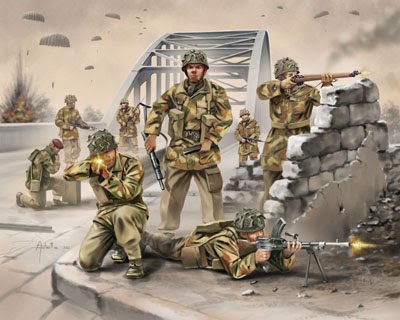 These 20 mm figures were a bit of a challenge. I have never painted personal camouflage in the past, and the dennison smock that the these paratroopers took me 3 goes before I had it right. I am sure they could be done better but for war gaming they look OK. I will get better on my next go with them. The figures are from TQD castings, and really they are quite nice. Beautifully proportioned, with lots of neat stuff, my only complaint are that they are on slotta bases. I had to hack off the slots for the Senior Leaders as I base them on nickels, rather then pennies, but I used the supplied bases for the men. The faces are just great, although I think I have to work on the mustache on the chief. I have ordered more figures as I have decided that I will do a whole platoon for Chain of Command. The proportions are a bit wrong for a paratroop section as I was short of rifles, but that will be corrected when new supplies arrive. We have two senior leaders, a Piat Team, a Bren team, a 2" mortar team as well as troops with rifles and SMG's.

Next up will be some nice Winter War Finns, not as nice a figures as these, but over all effect looks good.
Posted by john de terre neuve at 12:42