More Brunswickers and some Austrians

Well here is my 15th and final submission to the Painting Challenge. These figures just push me over my personal goal of 1700 pts and I have to say that I am done with the brush for a bit. Rather then finishing with the 18 figures I need for my Romano-British force or the 16 figures left in the Hobbit box set I decided to finish off some Napoleonics.

Here are the final 2 units needed for the Brunswick Light Brigade at Waterloo. The 2nd Light have yellow facings and the 1st have tan facings. They join the 3rd with orange facings as well as the Avant Garde and the Lieb battalion in the Light Brigade. All I have to do now to finish off the Brunswick Corps are the 3 Line battalions, they will be next up as I they really have great looking flags, which were not available for the light troops. I just received some amazing flags from Flagdude. so maybe I will be unable to rest the brush for too long.

The final two figures to get over the 1700 mark are 2 Austrian commanders. A couple of years ago I started an Austrian unit, I am not sure if I will ever finish it, but I have 2 battalions of line, 1 battalion of grenzers and 4 companies of jaegers done as well as some artillery and a regiment of cavalry. A nice brigade sized force, but no brigade commander. So here we have an Austrian Major General with his ADC. These are Front Rank figures and are just very nice to paint. As you could see from the close up of the face I could have easily painted some eyes, which I have not been keen to do, but thankfully I have still resisted. 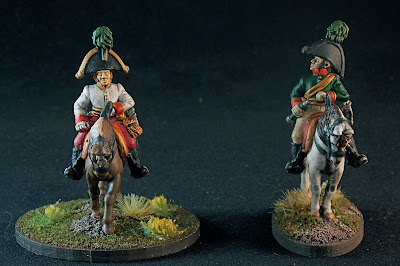 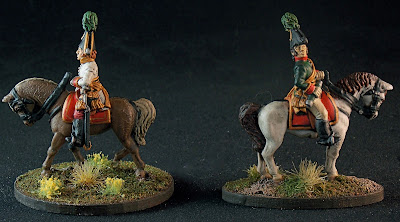 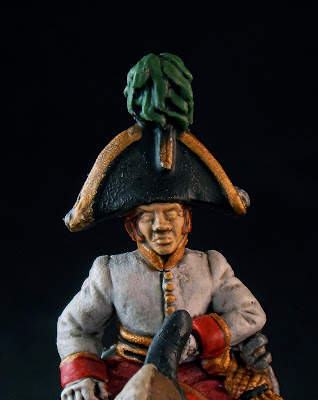 Well where to next? Well it is time to start playing some games. We are having another weekend in Montreal in about a month time. We have been struggling a bit looking for a Napoleonic ruleset. We have had several games of Black Powder, 2 games of Piquet Field of Battle, and 1 game of Curt's Food for Powder. We like them all, but we are still looking (Curt's ruleset is not completely developed yet, so we will be trying it again). We did a poll of our rulesets and have decided to test a new ruleset on each of our next 3 outings with one of us acting as a games master and being responsible for the scenario and presenting the rules to the others. I am up first and I am hoping to do my next posts on the process and then a report on the actual game.

In respect to painting, I have pretty well accomplished what I set out to do with SAGA (painted three 6 point war bands) and Dux Britaniarum (only 18 figures left to go for two starter forces). I also have promised to do an ancients force to tackle Iannick's Canaanites. A lot to think about there, but where most of them will be half naked, I am hoping to be able to get them out quickly.

So really I am keen to get back to filling in the gaps in my Napoleonic armies. It seems I have really lost control of myself here, I have a lot of soldiers with no where to put them. The only new force I am planning and I am going to stop there is the 2nd Netherland's Division at Waterloo. Otherwise I have started to look at filling the holes, ie. adding units up to bring things up the armies to coherent division strength. Anyway that is the plan!

Finally I have to say that I am amazed at the number of page views I have had for my last post, the army of the Taifa of Seville. In eight days I have had over 4600 page views of this post alone! This is a 1000 more page views then any other post I have done in the last 5 years. I am a little puzzled, but thanks for looking.