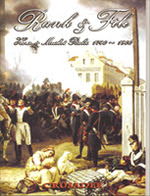 As discussed a couple of posts ago, our small gaming group is still searching about for a Napoleonic ruleset. There are 3 of us and we try to game monthly (well maybe that is a bit hopeful) in Montreal. Our gaming time is somewhat limited because I live in Massachusetts, but we all do our best. I believe Iannick and Nicolas are relatively well known to the readers of this blog and sometimes Iannick's brother Gabriel makes a fourth. We have not been completely satisfied with our gaming experiences to date so we decided to start a search for a new set of rules. Our plan is to test 3 new sets, with each of us being responsible for working out one set of rules and being the non playing games master. We have selected 3 rulesets to try Rank & File from Mark Simms, General de Brigade from David Brown and Shako II from Artie Connick. I have collected multiple rulesets over the last 5 years including Black Powder, Piquet, Piquet Field of Battle, Le Feu Sacre, Republic to Empire, Lasalle, Napoleon, Warhammer Waterloo, Shako II, General de Brigade, March Attack, Fast Play Grande Armee and Field of Glory Napoleonics. A lot of rulesets! As noted previously we as a group have played Black Powder and Field of Battle and I have a personal acquaintance with Le Feu Sacre, Lasalle, Republic to Empire, Waterloo and Field of Glory Napoleonics. I am unsure what Iannick or Nicolas played prior to us meeting up.

Well I purchased Rank & File 3 years ago and unfortunately it sort of got lost in the number of new rulesets that came out at the same time. Well a couple of months ago it got dusted off and I had a look. What I saw I liked so I decided to have a close look and selected it as my choice to present to the group.

Personally I like a system with the simplest possible combat (melee and firing) mechanisms possible. That means 1 dice throw to decide casualty. There are a lot of other things that are important to me, and although R&F does not have them all, it certainly has the above. Here is a summary I sent to my gaming colleagues as an introduction:

Skirmishers:
Victory:
The three weakness I felt were:
I decided though that this was OK, I may be wrong but I believe it simpler to add rather then subtract. Before I started checking the rules I got some clarifications from the rules writer Mark Simms on the Crusader Publishing Forum. There is not a whole lot of activity there but Mark appears to check the forum daily and has been very helpful in clarifying some of the rules (really not much help needed) but also offered some solutions to some of my concerns listed above.

Once educated, I have started to test the rules with a couple of units per side, really they are quite nice and easy to play. I have now almost completed a playtest of the rules using a brigade aside. I had planned to put the play test in this post but it is quite long already, so I will post it in a couple of days. I have found that my playtests of rulesets have been the most read posts on my blog and I really like to take my time with them.