I have been industriously painting and terraining for my upcoming Rapid Fire WWII game in Montreal at the end of the month. Only 10 little figures left to paint, and the terrain is pretty well done. The scenario itself has evolved, so I thought I would update you on my progress.


I will try again on the WWII sites to get some advice on the balance of the OB, before the information was somewhat conflicting. I got the general sense that the British might be a little weak so I beefed them up with some more tanks. I have also decided to have a conditional DAK reserve, depending on how the game is going. So if the DAK are getting destroyed early in the game I will have a trigger (yet to be invented) to add a small but powerful reserve force. I have some Panzers (several in fact) as well as 2 Diana SP AT 7.67 cm guns painted. Any suggestions would be appreciated.

Here is the terrain, small amount of drybrushing and other minor touch up needed, but all in all completed. When I am finished I will put up a post to chronicle my progress. The discs on the terrain are the blinds, only some forces will be originally on the table. I still have some other playing aids to do as well. I used an old 6x4' terrain cloth as the base and constructed the hills. All very mobile, you see for the car trip to Montreal. You can see some of the dug in DAK forces to the left. Dry brushing and sanding not yet done to the foreground. Still deciding on whether to add a little water to the oasis.

Here is the latest OB and scenario, pretty well locked up now, but like I said any suggestions for the conditional reserve and the trigger would be welcomed. 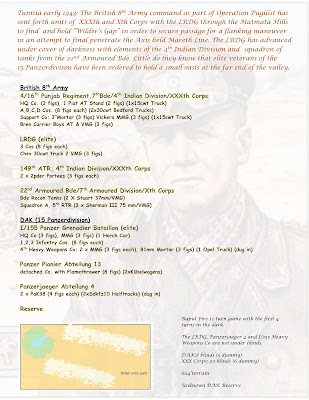