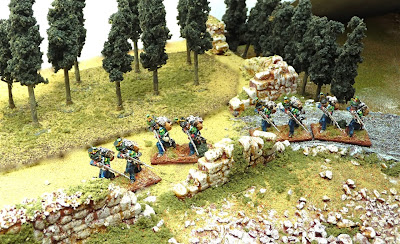 These voltiguers are the first off the painting table from the new Victrix French Napoleonic Infantry. As previously observed, I found these quite difficult to assemble. Generally, I do not like crouching figures as they are hard to set up in battalion order. Since I had no skirmishing stands for my French battalions, I thought that these 8 figures from the box could be used in skirmish order on 40 x 20 mm bases. Only 4 of the figures are voltiguers (the ones on your right on each base), but the differences are obvious only on the left side of each figure. I think it would be unlikely that I shall ever notice. All those little extra heads are very useful.
I was hoping that they would be easy to paint, but I found them a little challenging. I suppose, that I have never painted such an elaborate uniform and the fact that they were in a crouching position made some of the details of the uniform difficult to tease out.
Generally, GW washes were used over a white prime coat, with the details picked out using acrylic GW paints. Overall, I am not completely satisfied with the result, I feel I have done better. I shall have to see how the standing infantry figures go. 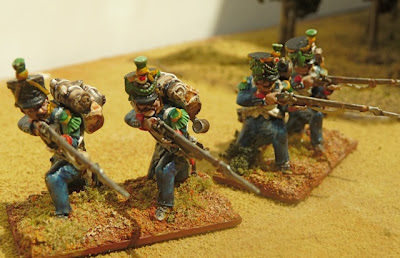