This unit is comprised of figures which were my first attempt at painting 28 mm Napoleonics. I started these figures in the late spring of 2006. Looking back at the figures now, I can see my painting style was quite rudimentary, but I think fairly accurate in respect to the uniform details, aside from a few idiosyncrasies. The first figures I bought were Foundry which make up the majority of the figures in the 1st Brigade, as well as Major General Picton. My big purchase of Front Rank Figures came in January of 2007, and these can be seen in the 3rd Brigade. The 2nd Brigade is mixed. The 2 English brigadier generals and the Portuguese artillery (actually converted British) are from Redoubt, these were painted about a year ago. I really find Redoubt figures are no match in quality to Front Rank or Foundry. Artillery units are quite expensive, and I got these at 80% off.
I have recently moved the figures around so the rank and file in each battalion are from one manufacturer. A bit of repainting of facings and base repairs were required, but the figures are otherwise as painted at the time. Most of the British battalions at the Battle of Fuentes de Oñoro fielded a little over 500 men, so the figure ratio here is around 1 figure for every 40 men. I have not bothered with grenadier companies, but each battalion has their light company based a skirmishers (2 figures).
Sir Thomas Picton, as he would have appeared at the Battle of Waterloo, but who could resist. 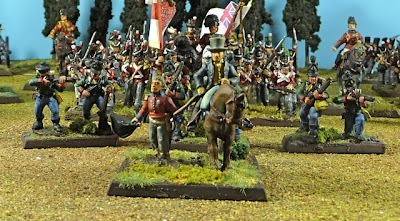 1st Brigade, led by Colonel Henry MacKinnon. The 74th Highland Foot was de-kilted by this time, but for some reason that escapes me now, I decided to dress the battalion colonel in full highland kit. Next is the 1st battalion of the 88th Foot, the famous Connaught Rangers. The last unit is the 45th (Nottinghamshire) Foot. The 60th Royal American Rifles had three companies assigned to this Brigade. 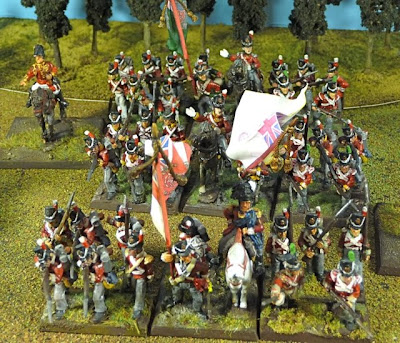 2nd Brigade, led by Major-General Charles Colville. Leading the brigade are the 5th (Northumberland) Foot, followed by the 2nd battalion of the 83rd Foot and the 2nd battalion 88th Foot. The last battalion in the OB is 94th (The Scotch Brigade) Foot. 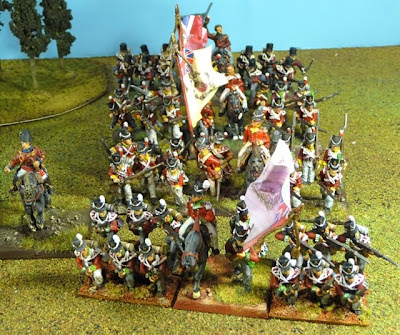 5th Northumberland Fusiliers, painted in error as fusiliers: The Fighting Fifth did not receive this distinction until 1836. I am not sure why their regimental colours do not match the colour of their facings (gosling green) 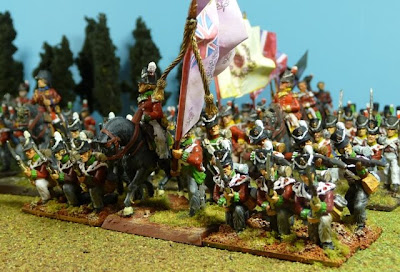 3rd Brigade led by Colonel Manly Power, here dressed as a Portuguese brigadier general. Here we have the 1st and 2nd battalion of the 9th line (Viana) regiment and the 1st battalion of the 21st line (Valanza) regiment, all in the Portuguese Northern Division. The command stand of the 1st/9 regiment was painted this weekend (I was short one stand) 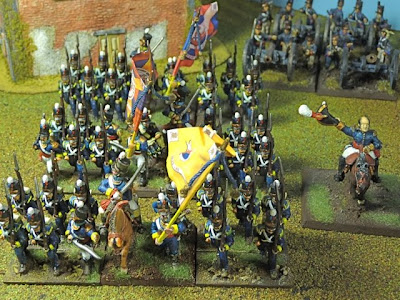 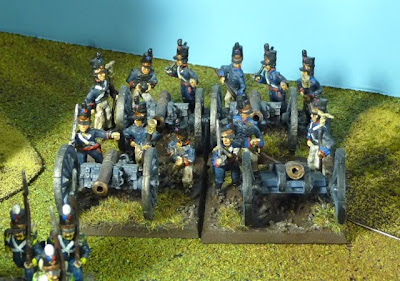 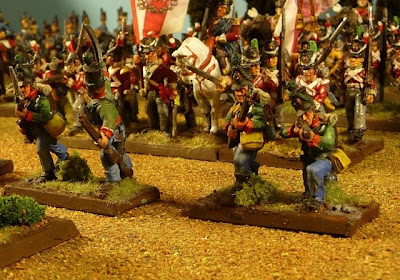