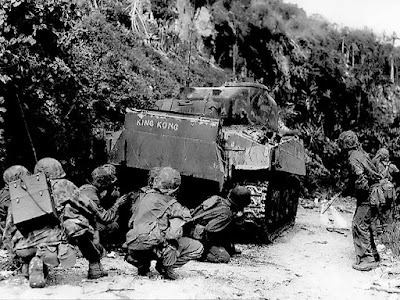 This past Monday week, we had our 2nd turn in the Saipan campaign. This was the "Delaying Action" scenario from the main rulebook, Very simple game, the USMC had to capture a JOP and end the turn to gain victory. This was a little tricky for the Japanese as this was pretty open terrain with the defensive points well forward. This is always difficult as the player wants to deploy in good position but also having JOP's forward makes it easy for the attacker to win the game. 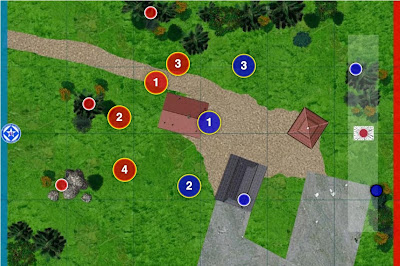 As you can see from the Patrol Ap result it, it did not come out well for me. I was able to get a JOP in the hard cover with the airport building but allowed P-Y to get in the jungle to the north allowing him advance along his left flank in cover. So on to the game.
USMC (FM 11) (+2 on FM roll)
6th Marine Regiment
Type F USMC Platoon- Fresh
2SL
3 Infantry Squads with JL and 12 men
Supports (10)
Red Dice (2)
Pregame Barrage (2)
M3A1 Stuart (5)
Corpsman (1)
Japanese (FM 10) (+2 on FM roll)
136th Infantry Regiment
Type B Infantry Platoon #1 (less 6 men)
2 SL
3 Infantry Sections with Jl and 11 men
Grenadier Section with JL and 8 men and 3 50mm Mortars
Supports (6)
3.7 Type 94 ATG (3)
MMG Team (3)
So on to the game:
My plan was to play it safe, I felt that this table was going to be a difficult one to win and this was obvious after the patrol phase. The USMC having a JOP in the forest on my right flank was going to be a real problem. I did have some cover in the small forest on my edge as well as in the terminal/control tower at the airport. I would have to deploy early and on overwatch.
So we started the game and of course P-Y had wisely taken a Pre-Game Barrage which was probably going to stymie my plans. I had taken a ATG as I was suspicious that he would take some armour and he did take a Stuart. He brought this on almost immediately and was able to get it in the jungle on his left flank. I was able to get an LMG squad as well as my grenadier squad in the jungle on my edge and by the tightest of margins was able to get in the ATG in there as well. By then, P-Y had deployed 2 squads in the same jungle on his left flank and then placed a 3rd squad behind the small rock in his centre. In response, I placed my MMG team on the top floor of the terminal as well as another LMG squad spread between 2 floors.
So here we were sitting with 80% of our troops deployed, it was really up to the dice now. Double phases where one could fire first and then manoeuvre or place the squad on overwatch (we play the TT modifications) would be ideal. Unfortunately for the IJA, the red dice here starting to show it's value with P-Y getting a lot of activations. I was able to get a good shot off at the Stuart but only 1 net hit; shock only! P-Y brought the power of his squads to bear, I think 19d6, re-rolling 1's is just a real challenge and soon I was taking a lot of shock without really getting the chance to fire back. A little over an hour into the game I decided to withdraw. Another USMC victory! Really going to have to get my ducks in a row for our next game.
Butcher's Bill
USMC (have a new platoon each game)
Final FM 11
no dead!
CO +2
MO +4
Japanese (platoon 1)
Final FM 8
1 man dead, 1 missing for next game (6 down again)
CO 0
MO 0
Platoon Leaders Outlook to be determined at the end of game 3
On to some terrific photos from the camera of P-Y.... 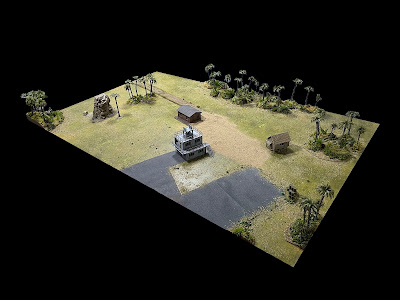 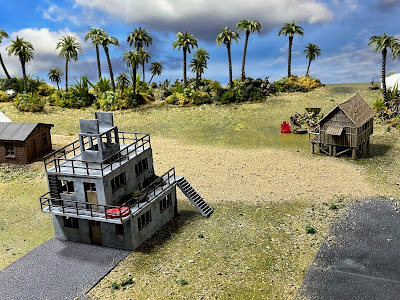 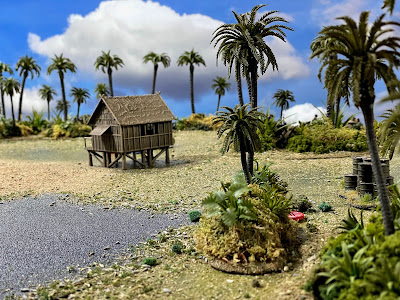 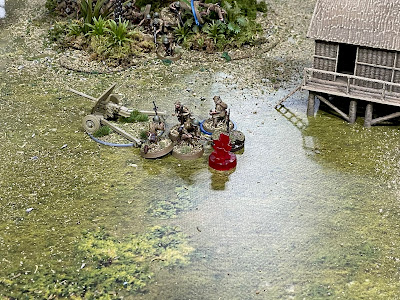 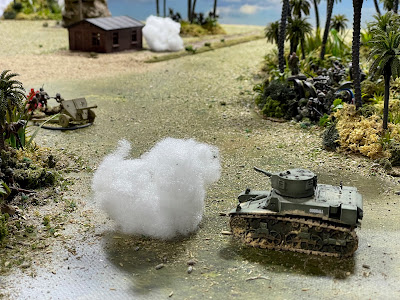 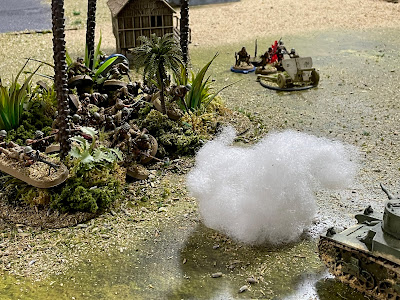 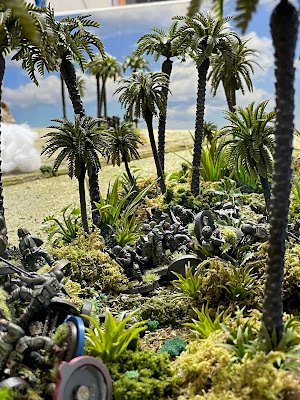 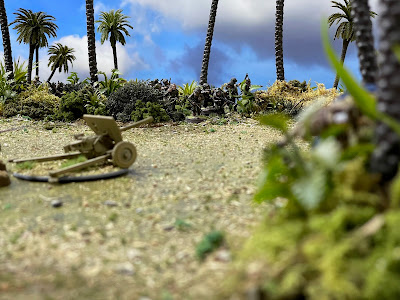 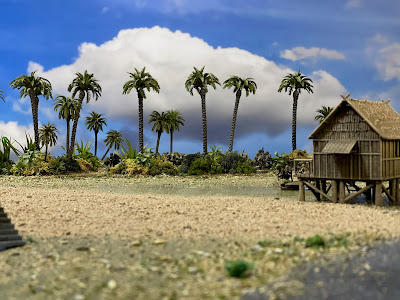 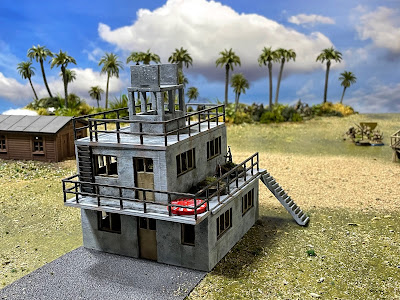 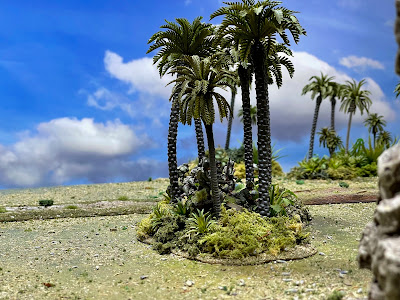 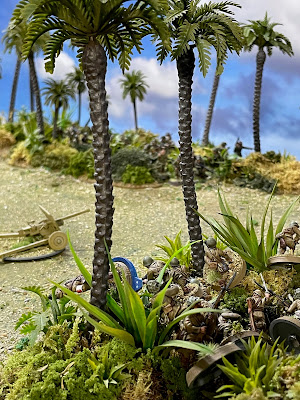 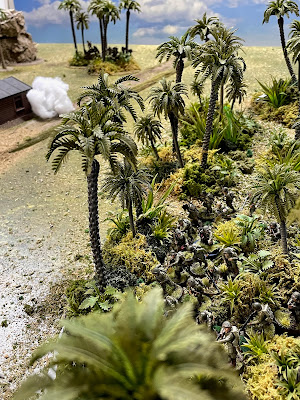 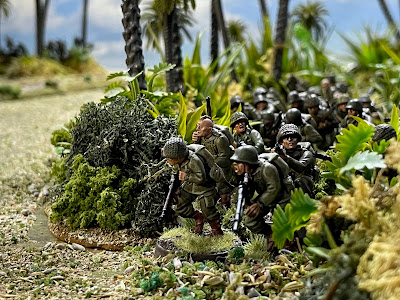 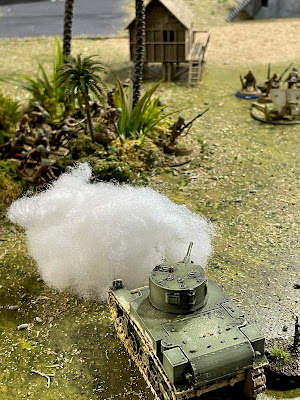 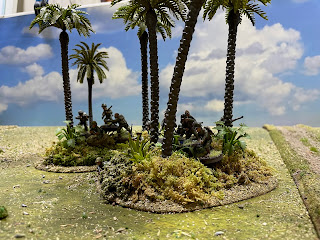 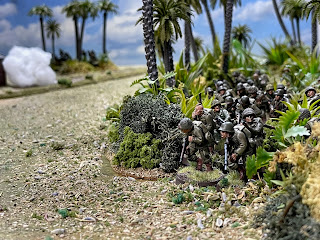 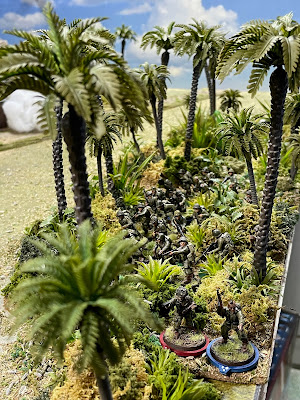 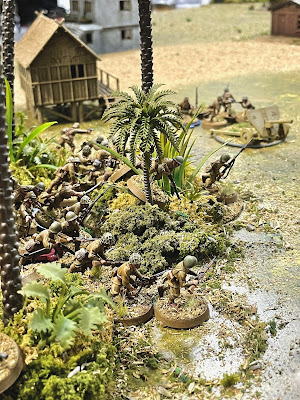 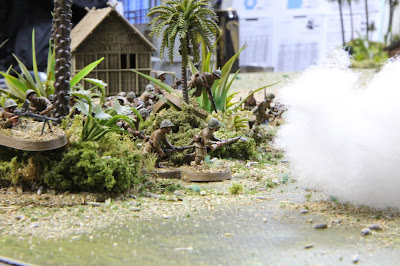 Our next game should be sometime in early November, as I am away next week.
Posted by john de terre neuve at 17:32