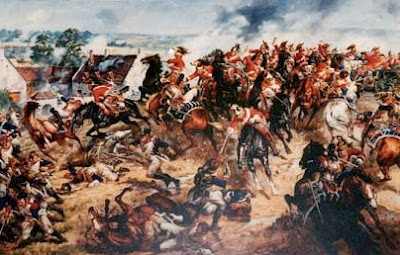 I recently got to play the latter part of this important battle within a battle twice over the last ten days. I took the scenario directly from the Lasalle rulebook. It looked interesting and I was curious what a scenario designed by the author (Sam Mustafa) of a ruleset would be like. So without further ado, lets get on with the Scenario.

Preamble: It is 7 pm, the outcome of the battle is still in doubt, but rumour has it that the Prussians have been sighted. The farm of La Haie Sainte, the critical centre piece, has finally fallen after a 6 hour battle to the French at 1830h. The French forces are exhausted but Marshall Ney, in command of the French centre, needs to push his troops forward up the middle to take advantage of this hard fought for victory. No reinforcements are available. He urges his brigade generals to take their forces and advance up the centre. The Allies are retreating but the valiant 1/95th Rifles and the 71st Light Highlanders have rallied and have formed a defensive line just north of the farm. They have rockets! Wellington has sent his reliable KGL infantry and cavalry to support the defense. 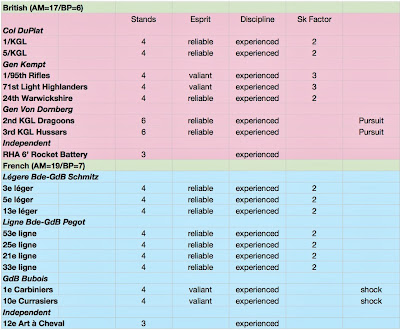 Game: Played on a 4x4’ terrain (taken exactly from the rulebook). Twelve turns with bonus as laid out in the rulebook. The double lined roads are linear obstacles (1 BW wide) which are soft cover. The farm house can not occupied. The tree line of deciduous trees to the right of French position is soft cover, normal terrain and is on a level one hill. The coniferous tree line is a linear obstacle for movement. The French set up and move first. The French set up on either or on both sides of the farm, but not north of it. The British set up north of tree line and/or the sunken road. There is no commander in this game, the advanced rules re Officer Tactics and Casualties are in play as well as those for Rocket Batteries and Rifle Volleys. Victory is by Army Morale rules in the rule book.


I will start with the more recent game that was played in Montreal last Friday evening. I was the games master, the two players diced for the armies. Iannick ended up playing the French and Nicolas the British. All the French troops are Iannick's, with the exception the cavalry which are mine as well as the British. The photos are a little dark as they were taken in low light, if I play with them too much they look funny. I believe though, that they illustrate the game relatively well.


The earlier game took place about 10 days ago on a Thursday evening at the Hobby Bunker in Malden, MA. Adam took the French and I took the British. In this game there was a slight difference in the terrain set up with the tree line on the French right flank being a linear obstacle all the way across, we also did not us the advanced rules for Rifle Volleys. The French ligne are Adam's, the rest are mine. You will also see that I used a 42' Rocket section at the Hobby Bunker. These are more siege rockets, I painted up an extra base of the 6' Rocket section in preparation of the Montreal game. I believe they would be more accurate to the scenario. Adam has already posted some photos and an excellent AAR of the Hobby Bunker game on his blog the Fencing Frog.


So two very different and challenging games, I believe we are all really enjoying Lasalle, the group in Montreal has now had three  games in a row with this ruleset and have no plans to discontinue using them. We are really starting to appreciate the nuances of the game.

I believe Adam in Massachusetts enjoys them as well. I continue to exert pressure on him to get the pdf of the ruleset, and I believe he has convinced me to try another Mustafa game.....Maurice in our next outing. I am looking quite forward to it, as I am very curious about Sam's approach to the utilization of cards in his most recent two rulesets.
Posted by john de terre neuve at 10:42