A Return to Gefrees with Lasalle 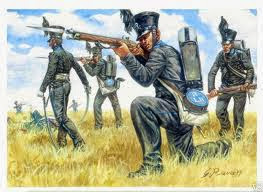 A couple of days ago I reprised the Battle of Gefrees using the Lasalle ruleset. I had acted as a gamemaster for this game in April using the Rank and File rules. I have a small brigade of Austrians and have almost completed the Brunswick corps so I was keen to get them in action.  I got the idea for the scenario from Wargames Soldiers and Strategy issue 63. The Battle of Gefrees is one of the few historical battles where I could field this allied force. I built on the scenario and we had a nice game with a clear Austro-Brunswick victory. I thought I would re jig the game for Lasalle. Since there was no gamemaster this time, I laid out the full scenario. I played with the victory conditions a bit, but generally the game was as before. 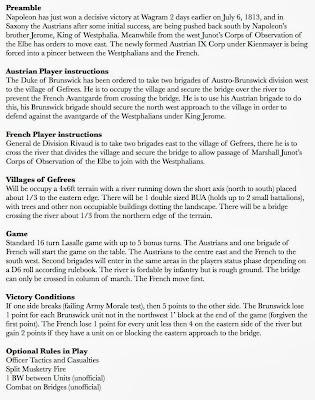 In the last game with this scenario the French appeared to have a tough time, so I toughened up their légere and added a unit of cavalry, I also took away a unit of Austrian artillery but added a unit of Brunswick Hussars. I took the attributes for the cavalry from the magazine, but otherwise all the rating are from the rulebook for the Liberation period. 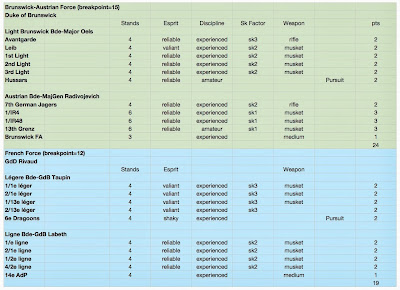 Recently I made contact with the Adam, the Fencing Frog, through the Lasalle forum. He was keen to learn Lasalle, so last Thursday we met up at the Hobby Bunker in Malden and had a game. He is a great guy, and despite not having played Lasalle before he picked up the game without difficulty. He picked it up so well, he in fact trounced me!

It all started well, I probably laid out the terrain a little bit tougher then I could have for the Austro-Brunswick force who essentially had to fight a defensive action. I thought it only fair that we dice for the sub-commander atributes just before the battle started. Adam threw successive 5's and 6's for his two French brigadiers, while I was less lucky. It started to dawn on me that this might not be so easy, both Adam's brigadiers were superb tacticians with vigorous leadership skills. In Lasalle terms this meant that that troops under their command would hit on 4 in combat rather then on 5 and that he could rally them on a throw of 2. My Brunswick brigade general did end up also being a superb tactician, but this was really little value to me as the main troops I had to use in combat where my Austrians. I also broke down my jaegers and Brunswick avant guard battalions in order to strengthen the sk factor on my line units. All the Brunswick units ended up with SK3 as well as the Germans, the Hungarians and Grenzers went to SK2.