I believe, I can blame it on painting the WWII figures. They were all just shades of brown and although I used multiple interesting named colours, really when you got down to it they were brown.....yellow brown, red brown, green brown, black brown, etc. I think you get the point!

I was sitting down at the table looking forward to getting back into painting Napoleonics, I have more than a dozen battalions of Prussians to paint. I had a look... pink facings good, but I now realised it was going to be all blue and grey, should I use Prussian Blue or Prussian Dark Blue! What about the purple, red and yellow pots of paint that are sitting on the shelf drying out.

For some time I have been interested in trying to work on some multiple figure stands and improve my terraining. The Impetus ruleset uses this type of basing, with each base representing one unit. A somewhat attractive idea for someone coming from gaming and painting Napoleonics at the battalion level.

I have been long interested in both the Crusader and the Sengoku periods as possible new areas to explore. I already know quite a bit about the history of the crusades, but nothing about the Warring States in Japan. I watched Akira Kurosawa's Kagemusha to get a sense of the period and was left with the sense that painting Samurai would be pretty cool. So there we have it. My research into the period was absolutely fascinating and I was completely captivated.

Looking at Basic Impetus it appeared that all that was needed was 7-10 bases per side to field a force in order to play a game, so I got stuck in. The Warring States period was characterised by different Samurai clans fighting with each other in constantly shifting alliances, as well as Ikko-Ikki (Buddhist monks in rebellion against the Samurai), and finally an invasion of Korea (against the Choson Koreans and the Ming Chinese). Certainly lots of options for multiple different forces and painting opportunities.

I decided to base my Samurai forces around the period of the Battle of Sekigahara in 1600, when the rival clans split into two factions. I decided to base my first force around the clans of Eastern Japan under Tokugawa Ieyasu. One of the most interesting things I found about the Samurai was their heraldry, so I decided that each unit in my initial force would represent a different clan. Here we have my first three units.

I decided to start with some mounted Samurai of course. Here we have the Katagiri clan with their Daimyo Katagiri Katsumoto. I wanted a fairly simple but colourful sashimono. 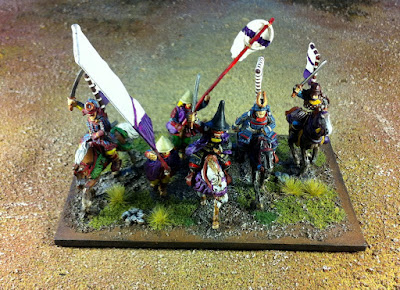 Katsumato is wearing the somewhat unusual helmet and is attended by 3 of his Samurai as well as a couple of bannermen. 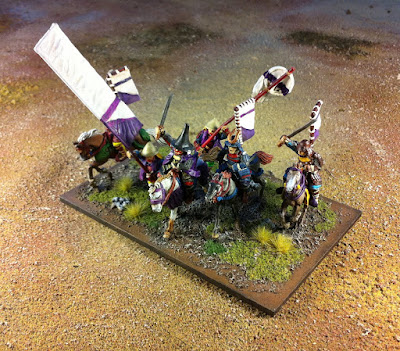 Impetus cavalry bases are 12x8cm and can contain as many as figures as deemed appropriate (usually 4 horsemen), this is also a command base as a Daimyo is contained within. 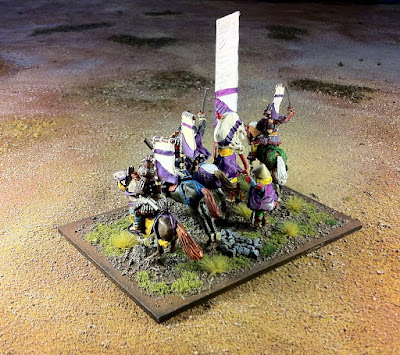 Represented here is the clan Kato, with an unit of Nagae-yari Ashigaru. The nobori is a slight variation on what is historically accurate. It took some cunning to get it done, but it does look cool. 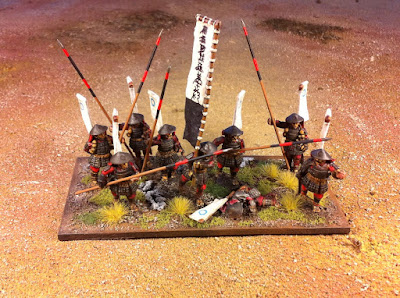 I should immediately also admit that most of these ashigaru were not painted by me, I bought them some years ago on ebay. It has taken me a long time to decide on what to do with them. I painted the casualty figure as well all the sashimonos and the norbori. The helmets were also repainted. Lord Ashram of the House of War is the responsible painter and quite nice they are indeed. 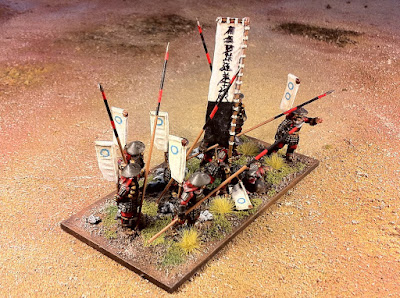 I will have another unit from clan Kato, with Kato Kiyomasa himself with his gigantic helmet planned as the centrepiece among several foot Samurai. 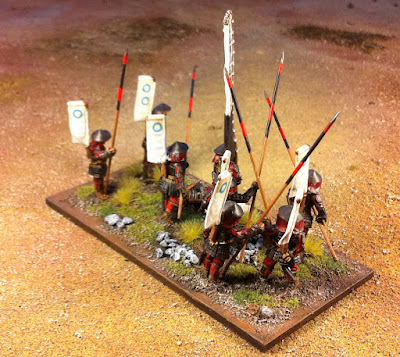 We will finish off today with clan Torri. Torri Mototada was a loyal retainer of Ieyasu, whose defense of Fushimi Castle resulted in Ieyasu being able to unify Japan and to end the Warring Period. His act of seppuku is the most celebrated in Japanese history 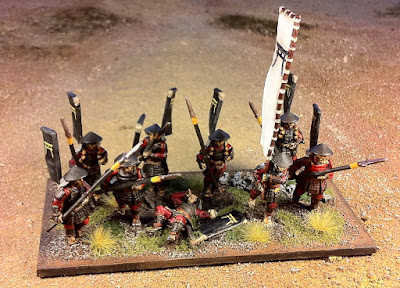 These Yari-Ashigaru were also partially painted by Lord Ashram, I painted the bannerman, the casualty figure, as well as doing the sashimonos and the nobori. 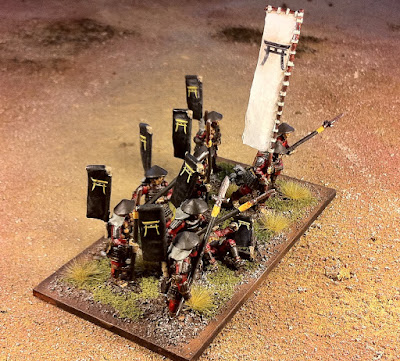 Decals were used here for the Mons, it was quite a challenge but I did learn a lot about photoshop, printing on decal paper and applying the decals. Infantry stands in Impetus are 12x6cm in size, again the number of figures is not important, but 8 are recommended. 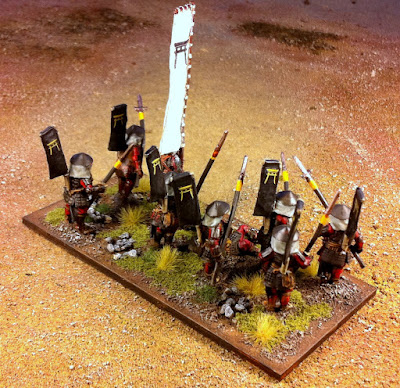 The obligatory close up, still a lot to learn about Samurai armour! 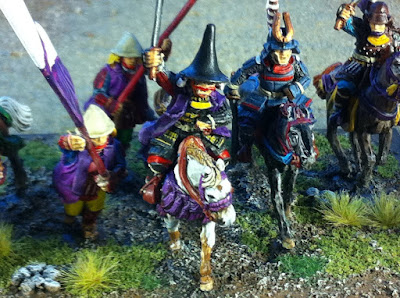 Well anyway, I am really painting some Prussians and promise my next entry will be Napoleonic.