For sometime now, I have wanted a terrain table. I started off painting 28mm Napoleonic figures for the fun of it and enjoyed the uniform research. Over the last couple of years, however, I wanted to learn how to war-game. It became immediately apparent to me that wargaming with 28mm figures is a challenge. I researched basing as detailed in an earlier post and came up with a fairly flexible plan which allowed me to either use 12-18 figure infantry (Le Feu Sacre) battalions that could later be easily upgraded to 24-36 figure (Général de Brigade).
Clearly to war-game at the corps (2-3 divisions) level, but controlling individual infantry battalions, I would need a big table. I live in a 3 level condo with the living space on the second floor (first floor to you Europeans), sleeping space on the third floor and an undeveloped attic on the fourth floor. We completed an attic renovation in December of 2007. To sell this to my two teenagers and their step-mother, I had to agree to a plan with the the majority of the space being devoted to a big family room.
I cunningly kept quiet about what we would do with the alcove off the main room. Once the renovation was complete, I quickly threw up a miserable 4'x8' foot table using a terrain mat. See here. I had successfully marked my territory. I could now initiate the master plan.
Next, I carefully calculated that the biggest table I could fit in the space, was 12'x5'. This fitted with my plan to use both 2'x4' and 1'x4' modular terrain pieces (to be discussed in future post). The great thing about all the wargaming blogs out there is that you can look at what others have done. What I was looking for was a very stable table, that at the same time was relatively light weight. Where the alcove has a peaked ceiling it also had to be easily movable, so I could pull it out to gain access to both sides of the battle field.
Lord Ashram's table seemed to fit the bill, but his is 6.5'x4' in size. Could I translate his construction style to a table which was twice as long? After contacting him, I found out that he used some bookcases from IKEA. 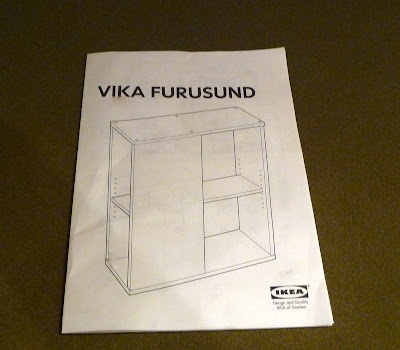 I bought 6 of them. I also bought 6 packs of castor wheels that I found at IKEA, these were well made with a steel ball-bearing construction. I hate assembling IKEA stuff, but the 6 legs went together quickly with their caster wheels. 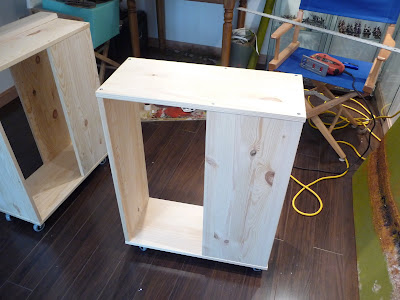 When I got home I realised that maybe I should of got 8, as the span of 12' seemed a little long to be supported by just 3 of the book cases. 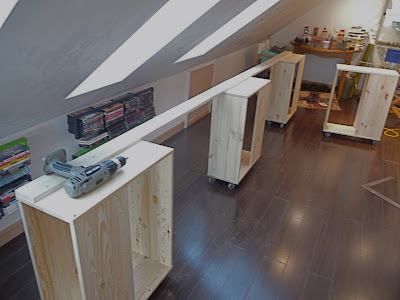 I was also limited by the fact that my car is small, and the longest length lumber that I could take home was 6'. Anyway, I went for it, knowing that only once the table was assembled  could I assess it's stability and mobility. I use finished poplar as it is harder and more rigid than pine, but almost as light. The table of course had to have "square" corners so it would accept the terrain modules without difficulty. It was important to get the two long sides perfectly straight. Knowing the lack of skill in my cutting lumber, I opted to get the highest grade pre-finished and accurately cut lumber, I could find. I just wish I could find good quality wood screws in the US, I had to do with the usual garbage you get at Home Depot. I wish I could get those Robertson screws that you can get in Canada, a Philips is a poor substitute. 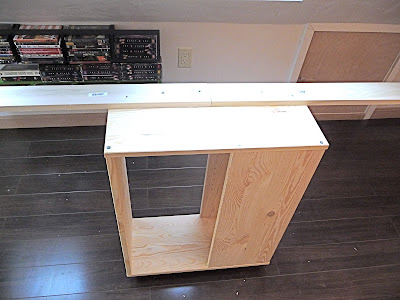 Anyway, here it is all tied together and fortunately the structure was quite rigid. 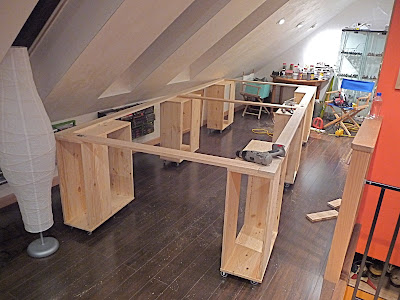 I then added some pine cross pieces (4 and 6" widths) every 4' to support the terrain modules. I may add some 2" width additional cross supports, but for now the present construction seems 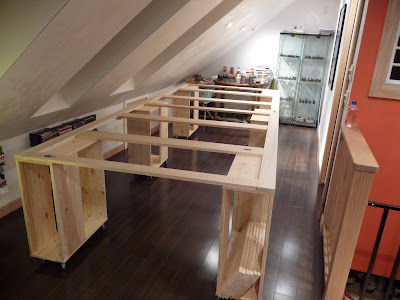 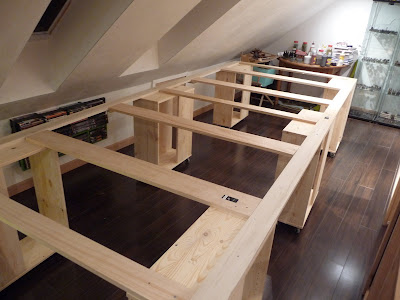 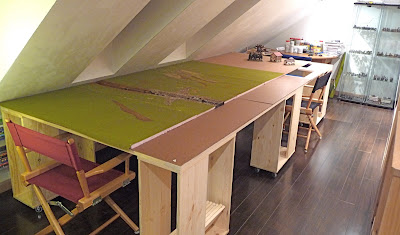 Come on get going the soldiers say, we do not like it on these little tables!!!